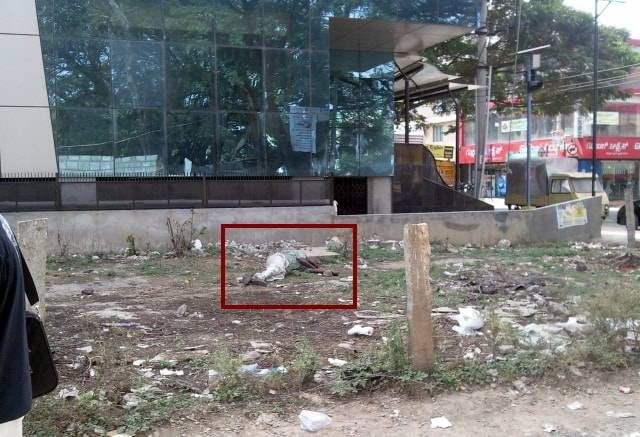 Yeah, that’s a real live human being sleeping on the ground. Location? Bangalore, the IT capital of India!

No, this is not what all of India is like. But, there are many out there, who share the same fate as this man.

What’s wrong with India? That’s the million dollar (or should I say rupee!) question.

The “great” politicians of our nation has taken Democracy and used it to sell empty promises, weave false hopes, sow broken dreams and reap the harvest and then sell it all, to fill their own pockets. I am not saying all of them are bad. 1%  of these “devils in white kurtas” might actually be in the system to make a change and to do good for the nation. God bless them.

Now to focus on the lying, thieving, moral less, heartless criminals and the “1000’s of parties” they belong to or are responsible for!

It’s amazing. These thieves wear the white outfit and walk around like angels, all the while, pretending to give a crap All they care about is being in the lime light and making as much money as possible by robbing the nation. How? Mostly bribes or RISHWAT (in Hindi)! Stealing money allocated to projects meant to better the nation. Getting DONATIONS from big shots to turn a blind eye and allowing them to do whatever they want, wherever they want, no matter who gets hurt. These are just a few of the ways, I am sure my fellow Indians could come up with more.

Not only that, nearly all of them (the politicians) have thugs/henchman, or gundas, as they are lovingly called, here at home. One kind of lowlife being helped by a totally different breed of lowlife’s. These gundas do the dirty work. They silence those who stand against the politician and his/her goals, all of them being personal gain, of course under the guise of doing good.

India is in trouble 🙁 All the art, culture, history and diversity (love those catchwords!) we have, amounts to a big nothing, if these politicians (in every corner of India) continue to rob the nation, as they have been doing (and still do) all these years.

These people don’t know God (I don’t care if they claim to have faith and have their religious ceremonies and false idols and graven images that they bow down to). They don’t know Him, the One, the Lord Almighty. For if they truly knew Him, they would fear Him with love and reverence. They would not steal, for it is written, thou shalt not steal. They would not murder. They would not do the evil that they do. The Bible is trustworthy. It is the true Word of God.

To all the politicians in India. I challenge you to read the Word of God, the Bible. Stop bowing down to idols and claiming piety, when your hearts (if at all you have a human heart) is black and made of stone. As the Lord Jesus into your life and He will give you hearts of flesh.

Stop destroying India. I pray that each one of these so called politicians will find the Lord and truly work to be a blessing to the nation and it’s people.

God bless you all.