Muslim ban is a big stretch but I don’t agree with the blanket immigration ban imposed on people from Iraq, Syria, Iran, Libya, Somalia, Sudan and Yemen.

I haven’t done in-depth research about the ban but have been seeing stories about the impact of this decision and my heart goes out to all who have a legitimate right to be in the United States of America but are now being turned back, detained or unable to enter the country, in some cases, being separated from family.

Update: I’ve just read an article by David French at National Review, which has cleared my own misconceptions about the order. First, there’s a temporary halt on refugee admissions for 120 days, after which they’ll be welcome again and two, there’s a temporary ban of 90 days for those hailing from one of the seven countries. David French does state that if this order is being loosely interpreted to deny entry to those with the appropriate/legitimate visas/paperwork, Trump’s adminstration should immediately sort that out and clarify who this order truly applies to. Failure to do so will lead to further chaos.

I understand the outrage at the decision but what I don’t understand is how so many have quickly labelled this a “Muslim Ban”.

I am not a supporter nor a hater of President Donald Trump but it is clear that those who are screaming “Muslim Ban”, are taking this opportunity to attack Donald Trump (more) and cause further division in America and it would appear that they are succeeding.

Why it’s not a “Muslim Ban”

According to Wikipedia, there are over 1.7 billion Muslims in the world. 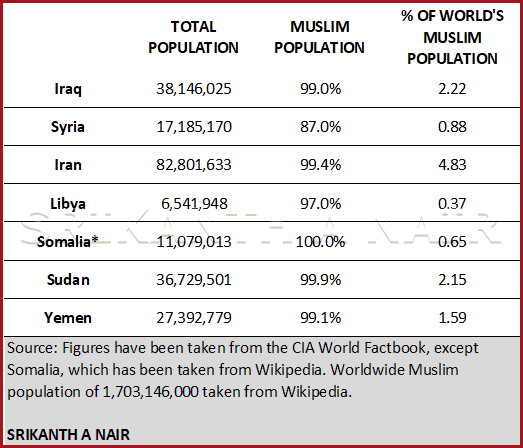 Now, here’s the list of the top 10 countries with the largest Muslim populations. Except for Iran, none of the other countries included in the ban appear on this list.

Also, if you notice, the top five countries make up nearly 50% (48.85% to be exact) of the world’s Muslim population and they are NOT INCLUDED in the list of countries banned by President Trump.

The point I am trying to make is that however wrong banning people from those seven nations is/maybe, don’t call it a “Muslim Ban” because in order for it to be that, EVERYONE who identifies themselves as a Muslim would have to be included in the ban. Not only is calling it a “Muslim Ban” incorrect, it is causing more hurt and anger than is necessary, which will lead to further pain and division in the populace.

Why I don’t agree with it

I was once an international student studying at the University of Houston. I wouldn’t have had that incredible opportunity if the United States didn’t have student visas that allowed foreign nationals like myself to be a part of the “American Dream”. While I couldn’t stay on in America because I couldn’t find a job/company that would get me a coveted H-1B visa, I know for certain that my time in America has had a lasting impact on my life and I wouldn’t change it for anything.

With this decision by President Trump, many people (including international students) from the banned nations who’ve gone through due process (which in itself is an ordeal but worth it in the end) to get the required visas, can no longer enter the country and pursue their dreams of a better future, a better life.

Is it possible that there are people in any of those seven nations who mean the United States harm? It’s likely. Does that possibility then justify a total ban imposed on anyone from those countries? Not really. It’s like saying that an orchard that may have a few bad fruits should be totally torched instead of seeking out the bad fruits while gathering the good ones.

My prayer is that this ban will be lifted quickly and that President Trump and his team will find a better way to protect the nation without jeopardising the lives of many who want to not only build a better future for themselves, but also sincerely want to be a part of the team that builds a stronger and more prosperous United States of America.

Update: I’ve just read on social media that Reince Priebus, the White House Chief of Staff has clarified that the executive order will not affect green card holders from this point forward. While this still leaves many others in limbo, it’s a start.