A few weeks ago, Nokia Australia had a Twitter competition to promote the release of Man of Steel.

It had been out in Australia for over a week by then, but I had yet to watch it. I wanted to, but I was patiently waiting for the crowds to die down so that I could truly enjoy it!

Anyways, these were the tweets from Nokia Australia.

Initially, I wasn’t sure if I wanted to participate. I just didn’t feel right about publicising something good I was doing for someone else. Eventually, I relented and tweeted the following.

Now, I didn’t consider this to be a huge sacrifice or anything, but it counted.

Imagine my surprise when I saw this tweet, later in the day 🙂 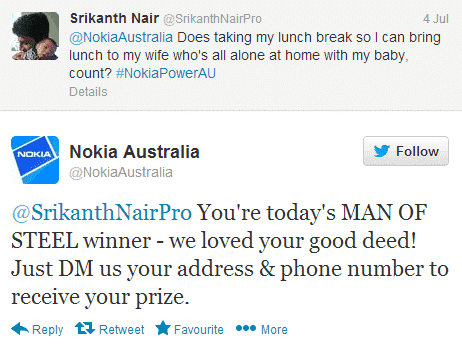 Those who know me, know that I’m a huge Superman fan! Obviously, I was excited. Sure enough, a week later, I was thrilled to take possession of my prize! 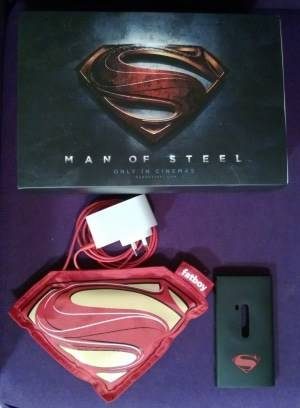 That’s a Nokia Superman Man of Steel Fatboy charging pillow and a protective case for my Lumia 920! This made my day and the movie passes below were just icing on the cake! 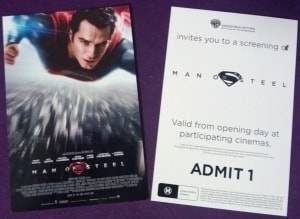 Since then, I have seen the Man of Steel and IT IS AWESOME! If you have yet to watch the movie, do yourself a favour and do it now!

I’m loving the fatboy wireless charger and to see the symbol of “hope” as my beautiful Lumia 920 is charging on it, is way too cool 🙂

As I write this post, there’s every chance that I will be using the passes above to watch Man of Steel again tomorrow, with my wife Amanda!

In closing, I just wanted to thank Nokia Australia once again, for picking me as the winner and for giving me these awesome gifts!